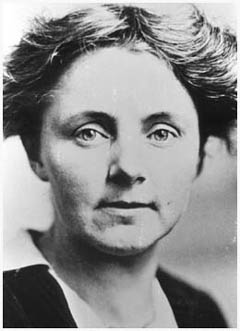 An undeniable icon in Seattle’s radical history, as well as that of the United States, Anna Louise Strong was born on the date in focus here in the uncannily-named Friend, Nebraska. She acquired many distinctions during her long and legendary life as a social justice activist, among them a Ph.D. in philosophy earned at the age, still academically precocious today, of twenty-three.

Strong first arrived in Seattle in May 1914, when she brought to the city a national touring exhibit she’d organized to advocate child welfare. She returned to take residence the following year, and in 1916 she ran for, and was easily elected to, the Seattle School Board. When the board’s bureaucracy stifled her wish to make the city’s public schools into venues for social service programs for underprivileged children, as well as neighborhood community centers, she soon turned to journalism as a source of personal and political fulfillment. Her experience covering the Everett Massacre for the New York Evening Post in November 1916 served as a catalyst for her transformation from a privileged young liberal into a passionate thirtysomething radical.

Strong was also a profoundly public opponent of the United States’ entry into World War I in 1917, a stance that led to the loss of her school board seat in a recall election organized by the all-male remainder of the board. After the dual experience of her witness to the Everett Massacre and her ousting from the Seattle School Board, she became a prominent public advocate for workers’ rights, especially during the 1919 Seattle General Strike. Her coverage of the strike as a reporter for the Seattle Union Record was arguably the greatest source of her fame — especially her legendary editorial published on February 4, 1919, two days before the beginning of the strike. There she famously proclaimed:

“We are undertaking the most tremendous move ever made by LABOR in this country, a move which will lead — NO ONE KNOWS WHERE!”

During the 1920s, disappointed by the failure of the Seattle General Strike and other failures of the U.S. labor movement in general, she turned her activist attentions to communism abroad, which led her to spend much of her later life in Russia and China in support of the respective revolutionary movements there. In 1958, at age 72, she finally settled in China, where she remained until her death on Easter Sunday, March 29, 1970.

Jeff Stevens is a Seattle native and author of the forthcoming City of Anxiety: An Alternative History of Seattle.
View all posts by radsearem →
This entry was posted in Uncategorized and tagged Anna Louise Strong, Everett Massacre, Seattle General Strike. Bookmark the permalink.